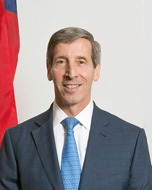 Joseph (Joe) J. Simons was sworn in as chairman of the Federal Trade Commission on May 1, 2018. Before joining the commission, Mr. Simons was a partner at Paul, Weiss, Rifkind, Wharton & Garrison LLP and co-chair of the firm’s antitrust group. His practice there focused on antitrust mergers and acquisitions (M&A), litigation and counseling.

Prior to joining Paul, Weiss, et al., Joe was the director of the FTC’s Bureau of Competition from 2001 until 2003, and he also served an earlier stint at the Bureau of Competition from 1987 to 1989 as assistant to the director, then assistant director for evaluation, and finally associate director for mergers. Along with a former chief economist of the Department of Justice Antitrust Division, Mr. Simons developed “critical loss analysis,” a technique for market definition that has been adopted and used widely by the Antitrust Division, the FTC and the U.S. Court of Appeals. It has also been incorporated into the DOJ/FTC Horizontal Merger Guidelines.