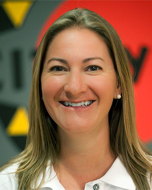 Gillian Smith joined City Year in July of 2011 as chief marketing officer, and is responsible for leading all of the organization’s marketing efforts including the launch of their award winning #makebetterhappen campaign. Prior to her work at City Year, Ms. Smith was chief marketing officer at Teach For America, where the recruitment marketing work contributed to more than a 150% increase in applications over the course of four years. Before Teach For America, Ms. Smith held several marketing roles at Burger King Corporation (BKC). Under her leadership, BKC marketing campaigns received a number of honors, including Cannes Golden Lions and Best Viral Advertising of 2004 (The Wall Street Journal). Ms. Smith has been recognized as a Woman to Watch by Advertising Age (May 2006) and an Online All-Star by MediaPost (September 2006). Prior to her work at BKC, Ms. Smith was a brand manager for the Coca-Cola Company in Germany. Ms. Smith is a graduate of Rollins College in Winter Park, Fla., and was a Fulbright Scholar in Germany.