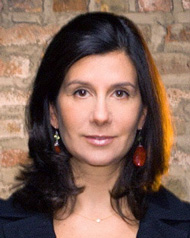 In her post as managing director of the Illinois Film Office, Betsy Steinberg leads the effort to attract film and television production to Illinois, marketing the state to Hollywood studios and independent production companies. She has helped guide the Illinois film community through its most economically successful years ever – breaking local spending records in 2007, 2010 and again in 2012. Immediately prior to coming to the Film Office, Betsy was vice president of development for Towers Productions where she generated millions of dollars in business for television networks including A&E, The History Channel, National Geographic, Court TV and MSNBC. She has produced, written and directed numerous documentaries including 2004’s “Isaac’s Storm,” the Emmy nominated docudrama based on Erik Larsen’s best-selling book of the same name. She began her career working for legendary media consultant and documentary filmmaker Bob Squier in Washington, D.C.