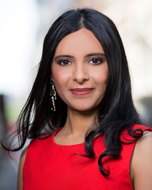 Previously, Ms. Subramanyam served as EVP and chief research and analytics officer of the CBS Television Network. She was also president of research, insights, and data analytics for iHeartMedia and

Ms. Subramanyam is a graduate of Northwestern University, with a Ph.D. in radio, television, and film.