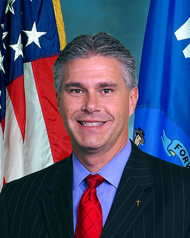 J.B. Van Hollen, Wisconsin's 43rd Attorney General, was elected on November 7, 2006, and took office on January 1, 2007. After winning re-election by an overwhelming majority, he began his second, four-year term on January 1, 2011.

As attorney for the State of Wisconsin, its officers and agencies, Attorney General Van Hollen has emphasized integrity and adherence to the rule of law. During a time when partisan politics has increasingly polarized the people of Wisconsin, Van Hollen has kept focused on enforcing and following the laws as written without regard to the underlying political and public policy debates. Professionally reasoned legal advice and client representation is now a hallmark of the Department's work.

General Van Hollen has vowed that fighting crime also would define his work as Attorney General. A philosophy of first principles, limited government, and the Department's role as an "exist to assist" state agency has guided his tenure as Attorney General. In 2011, General Van Hollen’s peers nationwide elected him to the office of Vice President of the bipartisan National Association of Attorneys General (NAAG). In June of 2013, he became President of NAAG.

Van Hollen graduated from St. Olaf College in 1988 with undergraduate degrees in Political Science and Economics. He earned his law degree two years later from the University of Wisconsin Law School.

Van Hollen began his public service career as an Assistant State Public Defender in Spooner, Wisconsin. In 1991, he became a federal prosecutor, serving as an Assistant United States Attorney for the Western District of Wisconsin. Governor Tommy Thompson appointed Van Hollen as District Attorney in Ashland County, where he served for six years. He was subsequently appointed by Governor Thompson to serve as Bayfield County District Attorney. Van Hollen was later elected to the position, enjoying bipartisan support as Bayfield County's only elected Republican. Prior to becoming Attorney General, J.B. was appointed United States Attorney for Wisconsin's Western District in 2002 and served there until 2005.

J.B., his wife Lynne, and their children, Byron and Madelyn, live in Waunakee. He enjoys hunting, physical fitness (including participating and finishing Madison's Ironman Competition), and is a voracious reader.

Van Hollen served as Grand Master of Wisconsin’s Grand Lodge of the Free and Accepted Masons, one of the most ambitious philanthropic organizations in the United States and has served on the George Washington Masonic National Memorial Association Board of Directors, an association committed to the legacy of America’s Revolutionary War General and First President of the United States.