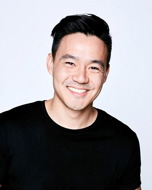 Philip Wang is a co-founder of Wong Fu Productions, a digital production company with modest college roots in 2003. Since then, they've amassed 3 million subscribers around the world with over 500 million views of their dramatic short films and comedy sketches. Their creative work has been recognized for its striking quality and emotional depth, as well as its authentic representation of Asian Americans, earning honors and praise from organizations like CNN, NPR and even the White House. As a pioneer and leader in the digital space, Philip and Wong Fu Productions continue to expand on and off their channel, most recently with their indie series Yappie, their feature film Everything Before Us, and their original series Single by 30 on YouTube Red.