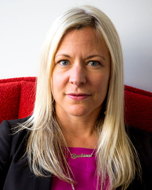 Robin is a Senior Sales leader at Twitter, based in SF, and is responsible for overseeing strategic client relationships with marketers across the country. She has been with Twitter since January of 2012 and during that tenure has worked with a variety of clients in a variety of roles. She previously led the Tech and Telecom vertical and prior to that she oversaw the Consumer Package Goods category.

Robin has over 17 years experience in the advertising and marketing space. Prior to joining Twitter she was a Category Sales Director at AOL on the east coast, managing the Government and Politics category and was also responsible for running some of AOL’s largest advertising clients. Robin’s background also includes years with Time Inc. working for PEOPLE and PEOPLE.com on the west coast, as well as agency side work where she began her career working on the Apple account at TBWA\Chiat\Day in Los Angeles. Robin is originally from Chicago, Illinois but resides in Tiburon, CA with her husband and young twin daughters.