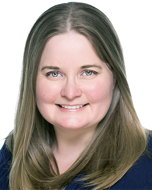 Cathy Whitlock is the senior director of online communications for the Parkinson’s Foundation, where she directs and executes the digital communications strategy.

Previously, Ms. Whitlock worked as a senior editor of Latin American markets at PR Newswire, focusing on financial, medical, and nonprofit news of the region. She also served as a design software teacher at the University of Miami Digital Media Lab.

Ms. Whitlock received her B.A. in English and Spanish from the University of Miami and her M.S. in strategic communication from Purdue University.