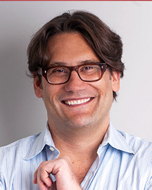 Joe Zawadzki is CEO of MediaMath, which he founded in 2007 as the first demand-side platform (DSP).

Previously, Mr. Zawadzki was founder, president, and chairman of Poindexter Systems — which later rebranded as [x+1]. He also incubated Right Media, was a managing member of Occam’s Razor, and remains an active New York technology investor after spending his early career as an investment banker.

Mr. Zawadzki is a graduate of Harvard University and holds several patents in the area of online methods for dynamic segmentation and content presentation.